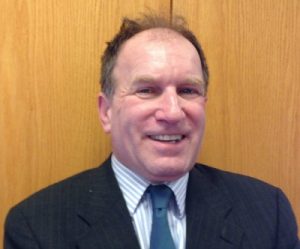 New Town Administrator Tom Younger spoke to the full board at its January 10 Chamber of Commerce board meeting. In Stoneham since October 17, Tom spoke about his extensive local and state government experience, his early impressions of the Stoneham community and his goals and vision for the future.

He opened his remarks by stating he was “delighted” that he would be working with a chamber focused solely on the Stoneham community, and not one that was shared across multiple communities as has been his experience with his previous TA positions. Tom is impressed with the community and is enjoying working with the different stakeholder groups in the town. Of particular interest to Tom is the importance of a vibrant Stoneham town center. He applauds the current initiatives for revitalization work and encourages continued emphasis on improvements for walkability, signage, lighting, etc. Tom asked the board to look to him as a true partner in advancing these efforts.

Tom has over 30 years of public service. He has been the Administrator for the towns of Oak Bluffs, Norton, North Reading, Belmont, and most recently, Swampscott. He has previously served on the board of the Mass. Municipal Management Association. He was a member of Governor Deval Patrick’s Local Government Advisory Commission, and has been inducted into the Pi Alpha Alpha Society for national honors in public administration.